The McGregor Fund and Community Foundation for Southeast Michigan bestow $140,000 in total funding for shelter and HandUp platform

South Oakland Shelter received a major boost in our efforts to change lives for the better – thanks to two generous grants totaling $140,000 from the Community Foundation for Southeast Michigan and the McGregor Fund.

This funding will allow SOS to put more time and resources into our longtime mission to end homelessness and alleviate the affordable housing crisis in metro Detroit.

The potential impact of this funding is extraordinary.

The McGregor Fund, a Detroit-based philanthropic foundation that supports efforts to improve the lives of metro Detroiters living in poverty, recently awarded an $80,000 grant to assist SOS in its fight to end homelessness and housing instability for individuals and families in crisis. Earmarked for general operating expenses, the grant is part of the foundation’s wider, ongoing commitment to provide annual funding to SOS.

“The McGregor Fund proudly supports South Oakland Shelter’s mission to make homelessness a plight of the past in metro Detroit,” said Heidi Alcock, the foundation’s director of grant development and communications. “The profound, life-changing services SOS provides to countless men, women and children align with the McGregor Fund’s core belief that every human being deserves dignity and opportunity.”

The McGregor Fund is a private foundation established in 1925 by gifts from Katherine and Tracy McGregor “to relieve the misfortunes and promote the well-being of humankind.” The geography of principal interest is the city of Detroit and Macomb, Oakland and Wayne counties, and its grantmaking prioritizes basic needs, recovery and restoration, and transformational skill building opportunities for teens and adults in poverty. The McGregor Fund has granted over $250 million to various agencies since its founding.

In addition, HandUp, a crowdfunding project owned by SOS, got a hand up of its own – in the form of a $60,000 grant from the Community Foundation for Southeast Michigan, which supports programs to improve life for all people in southeast Michigan. The recent grant will allow the site – which has raised nearly $3 million since its inception in 2013 — to forge ahead with plans to expand its reach, providing more people with a means to assist others in need.

This grant marks the Community Foundation’s second investment in the HandUp model. The Foundation previously awarded funds to aid the formation and coordination of the HandUp Detroit collaborative.

The Community Foundation partners with local nonprofits to support arts and culture, health, human services, education, community development, civic affairs and leadership development, and has led an array of special initiatives like the GreenWays program and the New Economy Initiative. To date, the foundation has awarded more than $1 billion in grants.

“The Community Foundation for Southeast Michigan recognizes the impact that HandUp Detroit has had in the region in its relatively short existence,” said Mariam Noland, President of the Community Foundation. “We are proud to partner with SOS, an organization that continues to provide innovative solutions to alleviating homelessness in our communities.”

Ryan Hertz, SOS’s president and CEO, underscored the enormous impact these grants will have on the shelter, the HandUp platform, and the metro Detroiters we serve.

“This support we have received from our local foundation community will allow SOS to both broaden and deepen our impact on homeless families in our region,” Hertz said. “The McGregor Fund’s now annual investment in our core operations offers a level of flexibility and space for innovation that is rare in the social services field, while Community Foundation for Southeast Michigan’s commitment to the HandUp platform will allow SOS to engage and equip other local service providers with tools that will assist many more people than any one of us could on our own.” 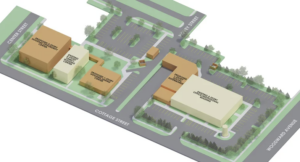